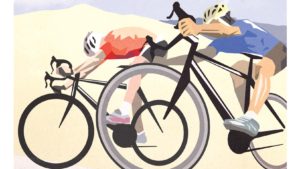 Cycling fans, mark June 22nd on your calendar! The 2nd Annual Peninsula Velo Brisbane Criterium is coming back to Sierra Point for another full day of fast paced race action! The race is held on a short course along Sierra Point Parkway and Marina Drive by the Brisbane Marina, that packs 8 turns into each 1-kilometer lap. Each race lasts 40-70 minutes and there are 10 different races throughout the day, starting at 8am.

At first glance it may not seem a logical combination, bikes and Brisbane. But truth be told the City of Brisbane has long been a friend to the competitive cycling community in Northern California. Perhaps you read the recent Luminary story on the January 1st San Bruno Mountain Hill Climb, an annual tradition for the last 35+ years, also hosted by Peninsula Velo. That is just one of the quality race events that have been held over the years in and around the city.

In the early 2000’s, Brisbane was host to two stages of the highly regarded Pilarcitos Stage Race and several of those same courses continued as standalone events promoted by Tom Simpson and his crew at Pilarcitos Cycle Sports. The Ronde von Brisbeen – a play on a legendary Belgian race known as the Ronde van Vlanderen or Tour of Flanders – was a short, but punishing circuit, that climbed up South Hill Drive, then plummeted down Valley Drive, easily hitting over 40mph.

Mr. Simpson is perhaps best known in the cycling community for his long-standing Bay Area Super Prestige Cyclocross Series. The queen event of that 5 – 8 race series was always “The Night Race” held at Sierra Point on one of the last undeveloped parcels of land out by the Marina. Every November a cadre of several hundred enthusiastic racers would descend on the parking lot and bumpy dirt field to engage in the madness that is cyclocross. Think steeple chase meets mud bath! Flood lights were brought in to illuminate the course, teams and clubs would build elaborate areas with lighting and BBQ’s, catered tacos and live music. It was truly an event!

The other standalone event that was routinely held in Brisbane – The Sierra Point Criterium. From 2004 – 2011 Pilarcitos hosted a technical and demanding race on a short 1-kilometer course with 8 turns including a 180-degree u-turn at the same Sierra Point venue as The Night Race. Last year Peninsula Velo resurrected the race and over 225 riders came out to give it a go!

Hoping to build on that momentum, the race is back for 2019 with a similar format of “primes” every couple of laps to keep the pace high for each category. Race Director Matt McNamara noted that a prime (pronounced preem) is a prize or award at the end of an announced lap. Cash is king when it comes to primes, so the race is nearly all cash based for every category. The crowd prime is a favorite, just drop some dollars in the bucket at the start/finish and watch ‘em go! Another unique element, according to McNamara, the 501c3 Prime. “Starting with a donated purse of at least $100 in each category, we aim to let the winner of the prime choose which local 501c3 they’d like to donate to, then we write a check in their name for the donated dollars.” Interested in supporting a 501c3 prime or another element of the race? Contact McNamara or Peninsula Velo. It’s a great way to get your company’s name in front of a good cause or just do something cool that helps your neighborhood.

The 2019 Brisbane Criterium will be held this year on June 22nd. There are 10 different categories of racing on offer for riders across ages from 18 – over 55. Both Men and Women enjoy equal prize money in all categories and the racing is fast and furious thanks to numerous primes on offer. Races range from 40 – 70 minutes in length depending on experience level. The top Women’s Pro race is set to launch into 50 minutes of racing at 11am, while the mens Pro field rounds out the day with 70 minutes of high-paced action starting at 4:30pm. To learn more about the event, including volunteer and partnership opportunities, visit Peninsula Velo online at https://penvelo.org/brisbane-criterium/.